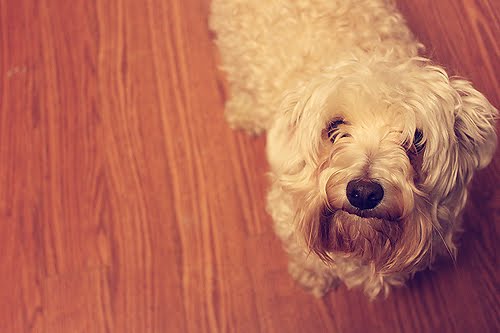 Have I ever shared with you how I came to have my pup, Wallace? A few months after I married Nathan, I had the urge to nurture something... either a dog or a baby. Yes, I know it sounds a bit crazy, but I am sure that some of you ladies understand that urge to love and take care of something! Nathan, being the smart mathematician that he is, took me to the Humane Society so that we could adopt a pet, thus putting off procreating as long as possible.

We adopted a puppy named Olive. We were told Olive was part Chihuahua, so she would be a small dog. 4 months later she weighed 50 lbs.... not really Chihuahua, huh Humane Society?

We found a lovely home for Olive with a college friend of mine, but I STILL wanted a dog to take care of. You see, I am a bit of a one track mind girl: If I set my mind to something, I cannot stop until it is accomplished. So, one afternoon, about 30 minutes before my evening shift at Starbucks was to begin, I impulsively drove to the No-Kill Animal Shelter, which happened to be right down the street from my house. 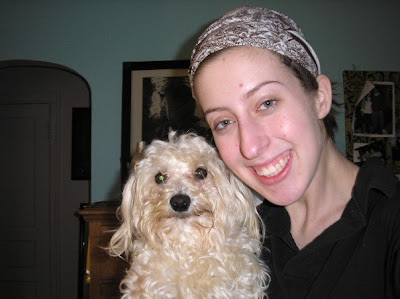 There, while in my Starbucks green apron and collared shirt, I saw him: A 3 year old white dog with matted curly hair, sitting in a cage filled with urine (I know, I am getting gritty). The shelter had at least 30 dogs in cages wagging their tales, eagerly fighting for my attention, but the little white dog sat scared in the back of his crate. 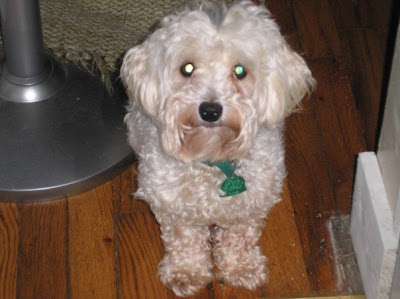 Perhaps it was fate. Perhaps I have a thing for underdogs. But, I asked the shelter volunteer to let me see this dog. The man took the dog from his crate and placed him in front of me. The dog and I simply stared at one another for a good 2 minutes. Then suddenly, the doggy waked towards me and put his paw on my leg. I was hooked.

Without thinking I said that I would take him! I paid for him, but had to leave him overnight, since my Starbucks shift was about to start. Did I mention I did all of this without really consulting my husband? 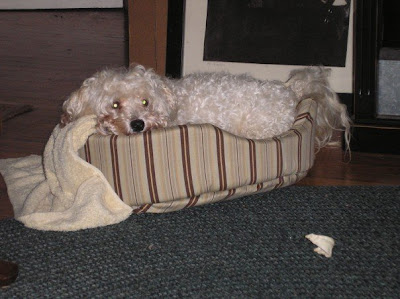 The next morning, at 6 AM (that is when the volunteer arrived at the shelter to let the dogs out) I showed up to pick up my new dog! I brought him home and sat him on Nathan's chest. My husband, who really was not too thrilled with my impulsive purchase grumbled from the side of his mouth "His name is going to be Wallace." I couldn't argue with him, because this doggy was such a Wallace!

Wallace tried to run away on the first day at home with me. In fact, he got loose on Campbell Avenue during 5 PM traffic. I was sure that he would be a goner, but somehow he survived!

Wallace and I were meant to be! When we got Wallace, he was 10 lbs under weight, covered in blue marker on his beautiful white fur, and apparently had come from an abusive home. He was afraid of most men, was not potty trained, and really did not act like a happy dog at all. It took a good year for Wallace to become the sweet, perfect dog that he is now! 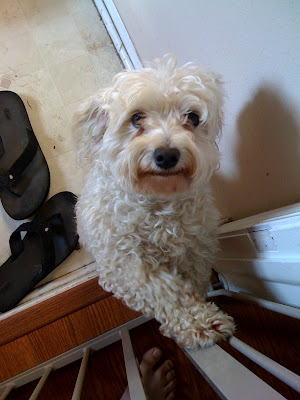 I would like to think that it was my nurturing that helped him heal from his scarred past. But really, Wallace probably always was this wonderful. It breaks my heart to think that there are people out there who are abusive to their pets!

I love my Wallace so much. He is the best pet and is such a joy! 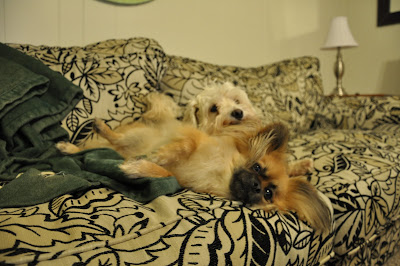